Inside a refugee camp- a volunteer's perspective

Who are in the camps?
I met Syrians and Iraqis at my camps. These were broken into further subdivisions- Arabs, Kurds, and Yazidi. Some people were from big cities, and were highly educated. Others were from small villages and had little education.

What are the people like?
The people in the camps were very welcoming. I was invited in to many tents and offered coffee, tea, dates, or whatever they could spare. Despite the shittiness of a refugee camp, people were quick with a smile, and happy to have a conversation with me. The kids were always eager to play too, and I had a few great games of football(soccer).


Are refugee camps dangerous?
The camps are all run by the Greek military, so there is a constant military presence at the entrance of the camp. Most people living there are also very kind- so I never felt like I was in danger. But there are snakes: rubbish collects around the camp, which draws in mice and rats, and the snakes eat the rodents. One man showed me pictures he had taken of two dead snakes, each about 2 meters (6 feet) in length. I’m told only one species of snake in the area is venomous.

And while the camp never felt dangerous, it can be unpleasant. During distribution, people are always on edge. I’ve been pushed. I’ve had rocks thrown at me by angry children. I’ve been yelled at. I’ve had old women, and crying children, and frustrated men beg me to give them special treatment- and in order to keep the distribution from falling apart, I had to say no. 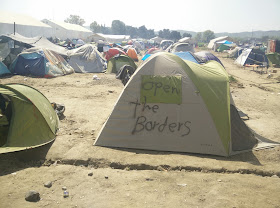 Conditions vary by camp, and they're hardly equal. Idomeni, which is now closed, had as many as 16,000 people, and was VERY rough. You can see pictures of tents among the rail road tracks. Families were also finding lodging inside abandoned trains. It was a border crossing that bottle necked when Europe shut its borders, and people kept arriving at the crossing, hoping to get through. Camps run by the military are generally cleaner and better, but are still no cake walk. 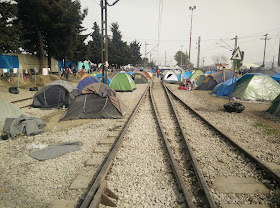 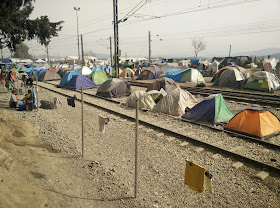 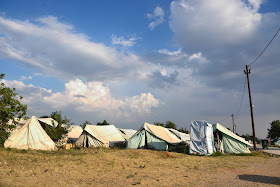 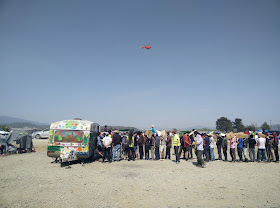 The bulk of our work was spent on distribution. We handed out pretty much anything, from eggs, to t-shirts, to underwear. The two camps I was at had about 1,500 people in them. Each family in the camp had one tent, and each tent had one identification card. The tents, and correlating cards, had numbers like G12 or B93 or C15. A person would come to us, show their identification card, we would type their card number into the computer, and then give them whatever supplies we were handing out.

We called the people by sections- “now serving sections A, B, and C.” This way we’d only have to deal with 100 or so people at a time, instead of the whole camp. One time the army screwed us over, and called the entire camp for distribution, rather than doing as we had asked and calling a specific section at a time. This resulted in a small mob appearing at our tent. There was pushing, yelling, a manic teenage boy kicked over our supplies and had to be hauled away, and there were plenty of people who wanted to argue about not receiving enough. The lesson here… planning is key. 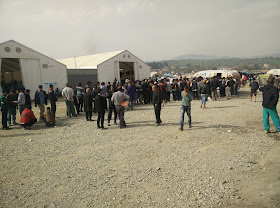 A good distribution is one that has been planned well. Everything from how the people enter the distribution area, to how they exit, to how the instructions are given, to how we arrange our goods, to how many people we let in at a time, to how we set up our team. Prepping for distribution really feels like preparing for battle- because so many things can go wrong, and the slightest mistake can have big consequences. Even though most people are peaceful and patient, it really only takes a handful of people to disrupt a distribution. 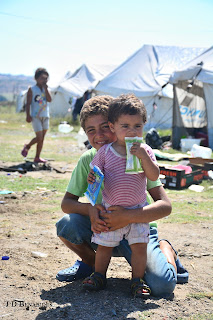 Are there many kids in the camp?
These camps are about half children. And there are kids EVERYWHERE. We can’t do construction in the camp because kids will materialize out of thin air and poke their curious little heads into our business- it doesn’t matter if we’re stacking boxes of tampons, or sawing slabs of wood in half. 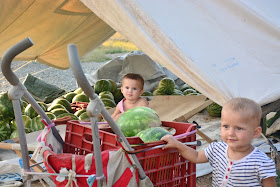 There are play areas for the children, a make-shift football (soccer) field, and a small playground. Each camp has a little school, but it’s not enough and the kids often get into trouble, for lack of things to keep them busy. I witnessed a lot of anger issues with some children. Lots of fights, lots of rocks thrown in anger, lots of tears- with little adult supervision to settle disputes. I witnessed two ten year old girls in a brutal fight, and when we pulled them apart we saw that one girl had deep fingernail gouges left in her cheek, red with blood. These are children who were used to structure, school, and a safe home- and now it's all gone- I think I would have emotional issues too. 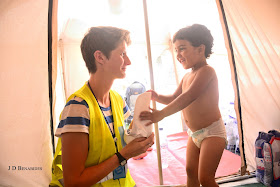 Many of the kids, troubles aside, are actually very sweet. They’re eager to help, and jump at the opportunity to carry a box, or to help us prep for distribution. Once a 13 year old boy asked us if we were hungry- when I told him yes, I was hungry, he disappeared and returned with a shopping bag full of croissants and juice boxes. Enough for our entire work team.

A handful of the kids can be trouble makers, and can cause problems for us, but the vast majority of them are bored, intelligent, kind children, eager to fill their time with something meaningful. I really treasure the time I spent with them, playing, teaching, and learning from these kids. 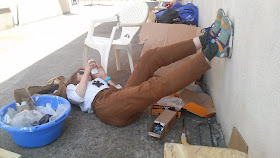 How long is the work day?
We (the volunteers) worked 7 days a week, often starting our shift around 9 or 10 am, and getting home around 8 or 9 at night. Some days were longer, some shorter. I’d say the average day was about 10 hours with a one hour break in the middle somewhere. I think the longest shift I ever had was a 14 hour day, although the coordinators were very clear that people could take a day off if they needed the rest. 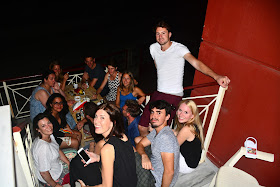 What's the cost of volunteering?
Most of us shared an apartment building with several rooms, which ended up costing us 15 euros a day, each. Others stayed in a nearby hotel which was 20 euros a day. It was also vital to have a car because the camps have no public transportation. In the low season a car can cost 10 euros a day, in the high season it can be 50 or 60 per day. I was there in the high season, and four of us shared the cost of the car- it ended up being about 12 dollars a day, after being split among us. Gas is VERY expensive in Greece, with a liter of diesel costing about 1 euro, and a liter of unleaded costing about 1 euro and 35 cents. That’s over 5 dollars a gallon for unleaded gas. Some German volunteers drove to Greece and then slept in their van- this saved them money on both lodging and a car rental.

Food in Greece isn’t expensive- a good restaurant will run you 7-10 euros with a nice beer and a hearty meal. A gyro is about 2.50 euros. Supermarkets are abundant and you can buy groceries for about the same prices in the US.

As you can see, the cost of volunteering, unless you plan on sleeping in a car, can get expensive.


How are the distributed goods organized?
We get a lot of donations- shirts, toys, shoes, etc- and we need a secure place to keep them, so we have a warehouse. We also need to know exactly how many of a particular item we have before we can hand them out, because we don’t do distribution unless we have enough for everyone. This is how we avoid heated arguments and
fights- if there are not enough supplies for everyone, then people are much more willing to cut in line, and argue, and yell, and fight. I spent many grueling hours in the warehouse- counting, labeling, stacking, sorting, folding, recounting, restacking… ugh… just thinking about it makes me crazy.

Why volunteer?
This is the largest refugee crisis since World War II. With millions in need, and the governments not doing nearly enough, it falls on people like you and me to clean up the failures of our politicians, and get to work. It’s the duty of anyone with a conscience.

But volunteering is so rewarding too. It’s wonderful to meet these people from such diverse backgrounds and hear their stories. And it’s fun to work beside a great team of volunteers. This experience has taught me so much about the world, and has introduced many friends into my life, volunteer and refugee alike. 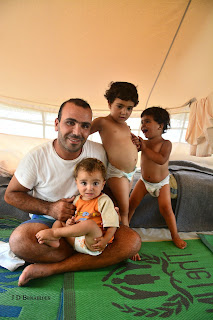 What's the best part about volunteering?
My favorite part of all this was the opportunity to walk around and speak to people one on one. To hear their stories, to learn about their hardships, their joys, their ambitions. To speak with the kids, and play with them, and hear all about their lives. The moments that will stay with me are all the intimate conversations I had with the people I met.

What's the worst part about volunteering?

There are some real difficulties with volunteering. The long hours. The head aches of distribution. The annoyance that the people we’re there to help can sometimes yell at us, or lash out at us. There’s the language barrier, and all the frustrations that come with clashes of culture. But honestly, the worst part of this experience is feeling like I’m just a tiny bandage on a massive wound. This crisis is so big, with so many key players involved, and everything I did was all a short term solution. I helped to feed, and clothe, and care for people- but it doesn’t mean anything if they can’t get to a place of safety. What these people need, more than anything I can give them, are open borders. Not being able to give them that, and not knowing if they’ll ever get it, is probably the thing that frustrates me the most. 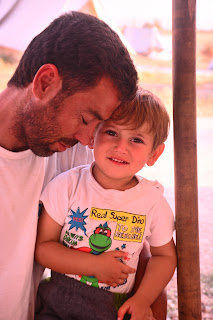